Portugal is much more than a tourist destination with wonderful cuisine and incredible landscapes. This country, positioned on the most westerly edge of Europe, has become a paradise for startups, either for them to discover that they can incubate themselves among the 135 existing startups in the country, or to carry on from where they left off.

One of the many reasons for Portugal being one of the main countries chosen by startups is the existence of an ecosystem that promotes technological development.

In November, the Portuguese capital will host the largest technology event in the world – WebSummit, for the fourth consecutive time. Between the 4th and 7th of November 2019, more than 100 investors will be present in the Altice Arena, Parque das Nações, Lisbon, along with hundreds of startups who are looking for investors to help grow their businesses.

It is no coincidence that this event is being held in Portugal. Between those hosted by the Portuguese government and those hosted by private companies, from the very north to the very south of the country, Portugal provides numerous programs to support and invest in new startups and promote meetings to expand their business.

How did we get here?

The 2008 economic crisis shook the whole world, and Portugal was no exception. Thousands of young Portuguese people were forced to emigrate in search of new opportunities, leaving all sectors of society in a very bad way. Portugal’s strategy in the post-crisis era was to try to bring these emigrants back, transforming the country into an attractive centre for new opportunities. Today, Portugal is one of the most attractive countries in which multinationals can create jobs, and in which new companies can take their first steps.

Quality of life at a decent price, a pleasant climate, a privileged position in the geopolitical landscape and a very rich culture are just some of the factors that have contributed to Portugal becoming a tourist destination of excellence, a place of preference for real estate investments and the new capital for new businesses.

Portugal’s new look stands out because of its technological dimension. The world’s largest technology event, Web Summit, brings together leading figures in technology development, turning Lisbon into the new Silicon Valley. The growth of the city took it all the way into the 2017 Startup City Index, earning Lisbon the title of fourth best city in the world to start a business, preceded only by Vancouver in 1st place, Berlin in 2nd and Manchester in 3rd, and ahead of London, which found itself in 15th place, San Francisco in 21st and New York in 22nd place.

The 2017 report from the Startup Europe Partnership also states that the startup ecosystem in Portugal is growing at a rate twice as fast as the European average. The country is able to compete with other countries in Europe, mainly because it offers a workforce that’s either equally or more highly qualified than those in other countries, coupled with the possibility of contracting at lower prices, such as those found in Berlin.

The volume of foreign investment into the country has also contributed greatly to the growth of the Portuguese technological ecosystem. Dozens of multinational companies have recently invested in projects in the country, creating thousands of jobs with a highly qualified workforce. In fact, Portugal is the European country with the fifth highest number of doctorates in science and technology per 1000 inhabitants aged between 20 and 29. 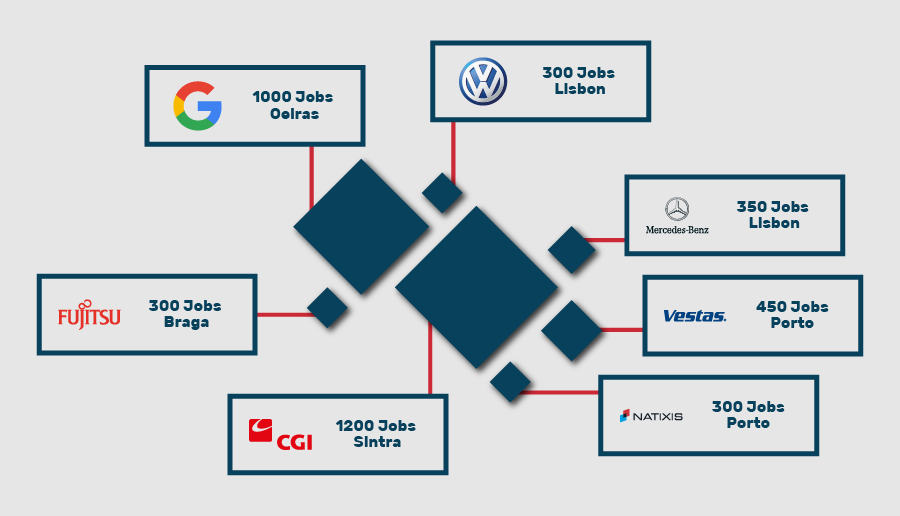 Hostelworld, Blip, Euronext Technologies, Altran, Cisco, Zalando and Siemens are other multinational companies that have been drawn to the Portuguese market. But startups aren’t choosing Portugal just because big companies are investing in the country – and to prove it, two Portuguese unicorns (startups valued at more than one billion dollars) have been born:

Another reason why Portugal has become so attractive is the incentives and efforts that the country has gone to, to develop its technological sector. The Portuguese government has developed the program StartUP Portugal, which aims to publicise the startup ecosystem in the country on a global scale. The program currently has 25 ongoing initiatives to support startups, examples of which are:

Take advantage of the Portuguese technological ecosystem and start investing with GPW!
Contact us